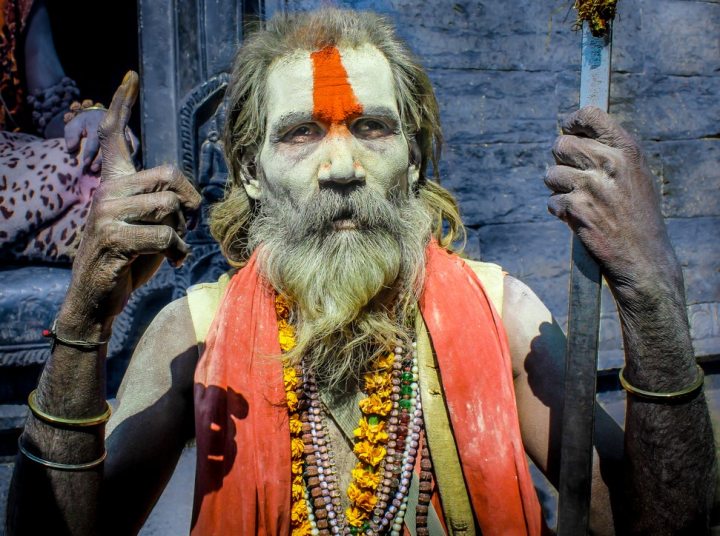 “Ma, I am fine…There is no need for this…” Ajay said in a forced whisper as if someone could hear him. But there wasn’t anyone around in the old building or in the grounds around the building. Ajay couldn’t make out what the building had been earlier…perhaps an old government office. He thought he saw the remains of an old filing cabinet in one of the rooms. An owl hooted loudly in the building somewhere. Ajay searched around for it.

“This is really not needed…I am fine…Let’s go…” he whispered harder to his mother.

“You call this fine…” his mother hit him on the ass with her umbrella.”

His mother shot him a look that threatened to mow down his beard then and there, “And is lying in your bed for 20 hours a day also ‘in’ right now…”

Ajay stopped walking and let his mother walk ahead. He was surprised by the change in his otherwise​ docile loving mother. Suddenly, she was an assertive person who knew what needed to be done. Her heart was in the right place, he just wished her brain was in the right one too.

“Ok, fine…but what are we doing here? What is this place anyway?” Ajay braced himself as a big fat rat ran past them.

“This is an Ashram…” his mom said charging ahead despite the rat.

“What kind of Ashram is this? Why do your ashrams have to get weirder every year?” Ajay stepped around what he hoped was an owl turd.

“Shh…the Babaji here is very powerful. You remember Kavya auntie’s son, that guy who used to roam around jobless and get into trouble. She got him here to meet this Babaji and that’s it! Now, look at how settled and well-behaved he is.”

“I am not saying you are anything like him. You are my beautiful boy. But there is something wrong with you and we have to fix it. Now!” His mom walked ahead with determination.

Ajay knew there was no point arguing with her when she got like this. He actually felt warmed by her need to set things right for him, he just wished her methods weren’t so… bizarre.

“So, does this Babaji have a name?”

“ Oh, we are down to Onomatopoeia​ for names now, that’s a good sign…” Ajay scoffed.

“You always have the energy to mock my beliefs, if only you were so enthusiastic about other things in life, we wouldn’t be here…” That shut Ajay up, but it didn’t help with his apprehension.

He had seen his fair share of Babajis. His mom changed them like fashion trends. A new Babaji every season. It made Ajay wonder if there was a fashion industry for Babajis that held its own Fashion weeks where the latest and trendiest Babas walked the ramp. He could picture his Mom with her entourage of crazy aunties sitting at one such show, looking at the Babas and browsing through catalogues of this year’s latest offerings in alternative spirituality and healing. He chuckled at the thought and got glared at by his mom.

The corridor opened up a little and they approached a large room at the end of it. A man in pink clothes stood guard at a pair of doors that seemed to need him to stand up. When they got close enough, Ajay could see that the man had pink lipstick on and wore pink eyeshadow and pink gulal on his forehead. Ajay was bursting to ask what the makeup was all about, but by now he had learnt to keep his mouth shut.

The guy looked at his mom, “Ah, you are here…” he whispered as if he had been waiting right there for them for years on end.

“Yes…We are…” his mom too whispered conspiratorially, as if they had been travelling for years to meet him there, “will he give us darshan?” her voice was laced with hope.

“You are lucky. He hasn’t been seeing anyone for days. But he will see you now…” the pink doorman whispered.

“Oh, thank God for that…I can already feel our luck turning!” his mom made a few frantic gestures to the gods.

“Please stay here…I will check if he is ready…” the pink doorman whispered. He lifted one of the doors and moved it enough so he could enter the room.  Ajay tapped his feet in apprehension and his mom tried to peer into the room while they waited. They could hear a loud voice in the room followed by the doorman’s whisper. Finally, the doorman emerged out of the room. He rubbed his forehead on a pink sleeve brushing some of the gulal off of it, “ Babaji will see you now. Remember do not talk too loudly and don’t make any eye contact…Om Phat…”

“Om Phat!” His mom also said as if they had been using the same salutation in their family for generations and she stepped into the room.

Ajay stepped into the room and thought he had entered a bower bird’s nest, a bower bird that had a liking for the colour pink. The room had been painted in several shades of pink in a haphazard manner. There were plastic and metal chairs strewn around that were painted pink. Even the ceiling fan that was moving fitfully had been splashed in a bright shade that made it look like a strawberry swirl as it went around. In the middle of the room was a large diwan, again painted pink. On top of it sat a thin man who looked startled to find himself there. His large bird-like eyes darted around the room and landed on Ajay and his mother, “Om Phat!” The man said it like a spell that would ward them away.

This seemed to agitate the Babaji even more and he fretted with the pink bedsheet beneath him, until the doorman came and stood beside him.

Ajay’s mom nudged him hard in his ribs until he too said the golden words and bowed to the Babaji.

The doorman bent closer to the Babaji and whispered, “Babaji, this mother has brought her son to you because he is doing nothing.”

Ajay could have slapped this pink flamingo like doorman.

Babaji seemed really flustered by this news. He sat up in his bed and pecked the air in different directions like a flustered bird. “Dark…Dark… CLOUDS…Dark… Clouds…” Babaji chirped at the top of his voice.

“Oh, no! Babaji sees dark clouds in the boy’s future. That is never a good sign!” the doorman​ said.

“Why Babaji? We are pious people, why is this happening to us?” Ajay hated the quiver in his mother’s voice.

Babaji looked around the room again, as his eyes darted everywhere. “Lizards…There are Lizards everywhere…Stepped on…Stepped on one.”

“Ah, Lizard dosha…” the doorman said as if it explained everything. And Ajay’s mom exclaimed as if it really did explain everything.

“Your son must have stepped on a lizard at some point in time. And the lizard has cursed him. That is why he has no energy for anything anymore.”

“Oh no…What do we do to remedy this…” Ajay’s mom also stared around the room as if an army of lizards was waiting to exact revenge.

“You need to bring a silver replica of the lizard and offer it to Babaji and it has to have pearls for eyes. The lizard has to be as big as the boy’s hand.” The doorman said in a voice that left no room for negotiation.

“I will get the lizard made immediately and bring it to Babaji!” Ajay’s mom said bowing in reverence.

Ajay was convinced that Babaji had simply seen a lizard on the wall and had probably stepped on it at some point today and was simply mentioning it as a fact. He could see the anxiety and panic that were swelling out of the poor person sitting there. He could feel his confusion and ennui. And that somehow made him feel a connection with this man. He smiled at Babaji, ‘we are all insane in some way or the other’ he wanted to say to Babaji, ‘but we seem to be more aware of it that the others’. And just like that, he felt something lift off of his heart. He looked at Babaji despite the advice not to do so. They looked at each other, two souls staring out of the curtains of their illnesses and they smiled at each other.

“But could Babaji give us some protection for the time being,” Ajay’s mom said.

Babaji gestured Ajay to approach him. Ajay went close to the Diwan, “Pink..” Babaji shouted, “Pink! Pink will protect. You will be fine” Babaji pulled out a thread from somewhere in his dhoti and tied it to his wrist and gave him a wide half-toothed smile.

Ajay was surprised that the thread really did feel reassuring. On their way back as his mother fussed about how she would go about getting the silver lizard made, Ajay found himself smiling and hugging her, “Thank you, mom! That did seem to help…” he heard himself say.

“Of course it did…I told you how powerful Babaji is…” and as his mother went on another rant. Ajay smiled as he regretted confiding in her.

One thought on “Insane remedies”