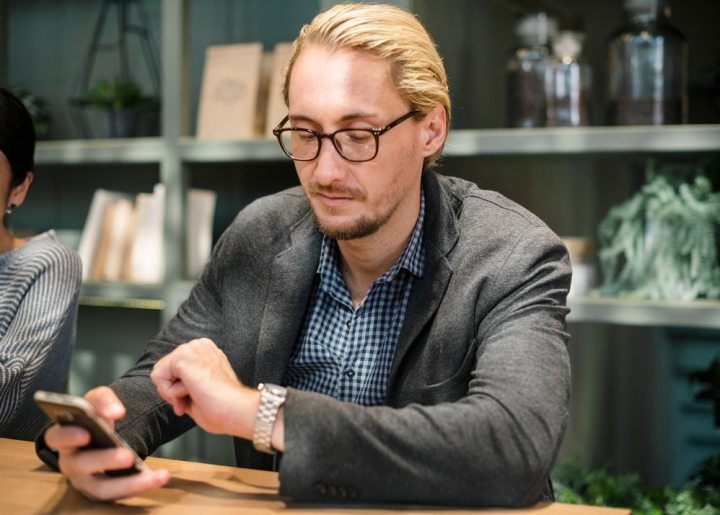 “Ah, why am I late? Well, in fact, there is a very interesting story behind that. But, do you think we have the time of that now? Oh, we do, is it? We have time for a long story, but we don’t have time for me being late by a few minutes, is it? Ok, I see how it is. Well fine, I will tell you the story.

Long, long ago before there was anything, Father time had just begun seeing Mother space. They had decided to go on a date that day. This was before they had moved in together and Father time still lived at his own place. Father time was very different then, not the busy, bossy, no-fun time we know now. He was young and relaxed. He had flowing black hair that needed a lot of care to style. And so by the time he took a nice long shower, styled his hair, picked out his outfit, and reached the venue of their date Mother space had been waiting for what seemed a very long time to her.

“You are late!” She shouted when she saw Father time.

Father time slid next to her, pulled her into an embrace, “but baby, how can I be late…I am time!” He smiled at her and winked. He thought this would fix things as it had done so many times before. But, Mother space had had it. This was the last straw. She just picked up her stuff and left. Father time waited a while, hoping she would be back. When she did not return, his heart broke, and as it was the first heartbreak it resounded loudly and its effects spread throughout the universe. You must have heard of it, we call it the big bang. Now Father time did catch up to Mother space. She did forgive him and they moved in together. Father time cleaned up his act and became the responsible punctual time that we know about. But even when Father time tried to catch up to Mother space he realized she had run to every corner of the universe. He did catch up to most of her, but there are still some pockets of space that time has not caught up entirely with. In these pockets, time and space are not one yet. Time works a little differently in these spaces. Now some people and events have the misfortune of being born into one of these pockets of space that time has to catch up to…um…me for example. Now since we are born a little before time has caught up with us, we are always running a little late compared to the rest of you people. You see, me being late is actually time’s fault.

And you think it is only me who is caught in this predicament? No, there have always been other people like this. Have I told you the story of the man in our village who was late to his own death? No, well looks like we have all the time for stories today, don’t we? Pentaaya from my village is remembered as the man who was late for his own death. You see, no one was surprised that Pentaaya would die at an early age. He was a chain smoker and a drunkard, and he had gotten an early start in both. He was no trouble really, he showed up to work on the farms at whatever time he could. He would patiently listen to the other farmhands and the landowners scold him for being late. He would do what work he could and take what pay he was given. He would wander into whatever bar he could find and drink as much as he could before wandering off to his house. Outside his house, he would wait for his wife to scold him for drinking and being late and eat what she fed him and sleep. He would wake up when he felt like the next day.

Now, Pentaaya slept like he was dead, so his wife had gotten into the habit of checking his pulse every morning just so she knew if she had to cook for him too that day. So one day, his wife checked his pulse as usual and couldn’t find one. She checked again to make sure and assumed Pentaaya had passed away. She began to wail loudly, mainly because it was expected of her. Her neighbours gathered around her and began to mourn, well mostly gossip about Pentaaya’s death. Soon there was sizeable crowd crying around him. The only person really grieving was the owner of the bar that Pentaaya was a regular at.

When his wife was wailing at the top of her lungs, Pentaaya could no longer sleep, so he sat up and shouted at her to be quiet. He was shocked to see so many people around him, and they were shocked to see that he was still alive. Several people tried to check for a pulse or for a heartbeat or breathing, but no one could find any. The doctor was sent for, he arrived with his stereoscope and tried to find a heartbeat, but failed. The doctor was astonished, “you see Pentaaya, he said, “medically you are already dead. You should stop moving now.” And Pentaaya agreed, but Pentaaya said he didn’t particularly feel like dying and he would do it when he felt like it.

And so for the next three days, Pentaaya continued to smoke and drink and eat what his wife cooked, all the time refusing to breathe or roll over and die. He got bothered by people wanting to feel his non-existent pulse and doctors doing weird tests on him. On the third day having drunk half a bottle of rum and eaten half a chicken, Pentaaya yawned and looked at his concerned wife. He yawned loudly looking at all the onlookers, “Alright fine, I guess I would better die now…” Pentaaya said and promptly dropped dead.

I see you are new to the history or human tardiness. There are several great personalities who have altered the course of human history by simply not showing up on time. Next time I will tell you the story of how the apocalypse has been put off several times simply because the devil has no regard for the divine plan and shows up late every time. But, for now, can we get on with this meeting?”