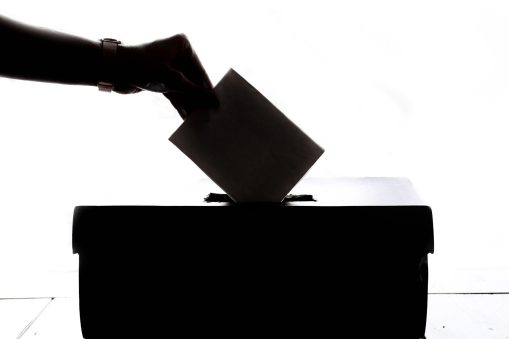 A warm morning sun shone into the courtyard of the school. The tree that stood in the centre of the courtyard came to life with the cries of birds. Shiva sat in the shade of the tree, hard at work on a thick rope that he was tying into an elaborate knot. He had been up and working for a long while already. He had set up a stage that now stood beside the tree. He had brought out chairs from the classrooms in the school and placed them in neat rows in front of the stage. As the school peon, it was his duty to set up the booth on election day and the stage on the counting day. It was also his duty to prepare for the results. He inspected the knot that he had tied, he pulled on the rope to make sure it held in the correct manner. He tied the loose end of the rope to the tree and hid the other end in a nook behind the trunk of the tree. No one liked to think of the rope before the results were announced. He inspected the stage one last time and went outside the courtyard to smoke a bidi before the counting began.

As the sun climbed in the sky, the courtyard was slowly filled with the buzz of the villagers gathered there. They greeted each other and sat in small groups among the school chairs exchanging news and gossip. The women sat to the right though there was no rule that they had to. Their whispers were loud but quickly suppressed like a bee caught in a bell jar. The men gathered to the left of the stage, they greeted each other loudly at first. But their conversations grew quieter, like a bullfrog that had grown tired of its own mating call. The children ran around the playground that they were so familiar with. They found it funny that they had to visit the school on a holiday and the empty classrooms rang with their shouts and laughter. By the time the appointed hour arrived the whole village had gathered in the school courtyard.

A hush fell over the courtyard as Pedayya walked into the school. He was followed by his usual entourage of thugs led by his son. The hush morphed into a reverential silence as he crossed the courtyard to reach the stage. Pedayya looked his usual proud self, his chest puffed in his white kurta and his stride strong in his white dhoti. He had been Sarpanch for a long time and didn’t really have anything to worry about. Yet there were large sweat stains on his white kurta and the hand that twirled his large handlebar moustache shook a little. He reached the stage, turned to the people joined his hands to them and sat down in a chair. His son stood behind him and the rest of the entourage sat down.

A murmur started in the crowd again as Bhushan entered the courtyard. He was the new history teacher at the school. He had stood against Peddayya for the post of Sarpanch in the election. The villagers whispered in hushed tones as he passed, he was as good as a dead man walking. His only real chance was to lose the election. Bhushan reached the stage, gave a low bow to the villagers and sat down.

The principal of the school got up from the crowd and climbed the stage. He signalled to Shiva, who opened the Principals office and brought out the ballot box.

Shiva placed the ballot box on the single table on the stage and retreated to the shade of the tree. The principal, Mr.Shastri, tugged at the lock to show that it was still locked and sealed. He showed the lock to both Peddayya and Bhushan and they both nodded. Shastri took a key from his pocket and opened the ballot box. He took two baskets from beneath the table and placed them on top of it on either side. He sat down at the table, removed a paper form the box, made a note of it and put it in the box that was placed on Peddaya’s side.

The villagers watched the counting process raptly for a while. The whispers started again in small pockets all over the courtyard.

“I really hope Pedayya wins…” Malli, the grocer’s wife said behind her pallu, “I mean how long has he been the Sarpanch? And look at the school building itself. The roof is always leaking. Didn’t he promise to repair it? My daughter is always falling ill. I hope he wins!” As if on cue Shastri put another vote in Peddaya’s basket. Salim, the goldsmith, fidgeted in his seat, he grimaced as he massaged his lower back, “the road leading to town is in such bad condition. The doctor says my back might never heal completely. How long has Pedayya told us he would repair it? And what has been done? You can bet I voted for him!”

“If only we had an ambulance service to the town, just like Peddaya promised, my sister would still be around to cast a vote for him” Sitamma, who sold flowers by the temple, wiped her eyes, “I hope he wins! I would really like to see him win!”

“I am sick and tired of running into the fields each time I have to relieve myself.” Pandu the confectioner said, “ My son had diarrhoea last week, it wasn’t even funny. Didn’t Peddaya promise a toilet in each street? You bet he has my vote!”

Silence descended onto the courtyard again as Shastri placed a hand in the box and it came back empty. He stood and checked the box, he showed the empty box to Pedayya and Bhushan. Then he bent over his book to tally the final score.

Peddaya and Bhushan both stood up. Peddaya looked straight ahead but his legs quivered in his dhoti. Bhushan had closed his eyes and joined his hands in silent prayer. Shastri double checked his tally. He stood and cleared his throat, “Bhushan has two hundred and fifty votes. Peddaya has two thousand eight hundred and twenty-five votes. Peddaya has won the election.”  Peddaya’s mouth fell open, his shoulders sagged and even his moustache seemed to go limp.

Bhushan sighed in relief, joined his hands to the heavens again and beamed at the villagers.

Peddaya’s eyes were bulging, he did not move. “There has to be a mistake. I call for a recount of the vote” Peddaya’s son shouted.

“I have opened the ballot and counted it in front of the whole village. You are welcome to recount it…” Shastri said.

Peddaya’s son ran to the baskets and went through the votes, “who, who has voted for my father? Which of you has voted for my father?” he shouted at the villagers. The villagers erupted with a raucous joy that subdued him, he took a few steps back and faced his father, “there has to be a mistake. Tell them we will do better next election.” Peddaya did not move, he stared at the villagers with his mouth open. His son faced the villagers, “We will…we will do better this time, I promise. We will build the roads, there will be fresh drinking water all day. And every house will have a toilet!” The villagers continued to cheer. “There has to be a mistake….” Peddaya’s son said as he sat down in his father’s chair with his hand in his head.

Shastri nodded to Shiva. Shiva went around the tree and remoed the rope he had hid there earlier. He flung the rope over the branch of the tree. The villagers fell silent again as the noose swung on the branch. Shiva placed a small stool beneath the noose. He walked to the stage and led the still shocked Peddaya to the tree. He helped Peddaya onto the stool. Peddaya’s hand twirled his moustache as the noose was placed on his head. Shiva kicked the stool and moved away. The villagers watched in rapt silence. Peddaya twitched his legs as the birds continued to chirp in the trees and children continued to shout in the school. The villagers waited until Peddaya was done twitching. Then they turned towards Bhushan, who was still smiling with joined hands. They cheered for their new Sarpanch.